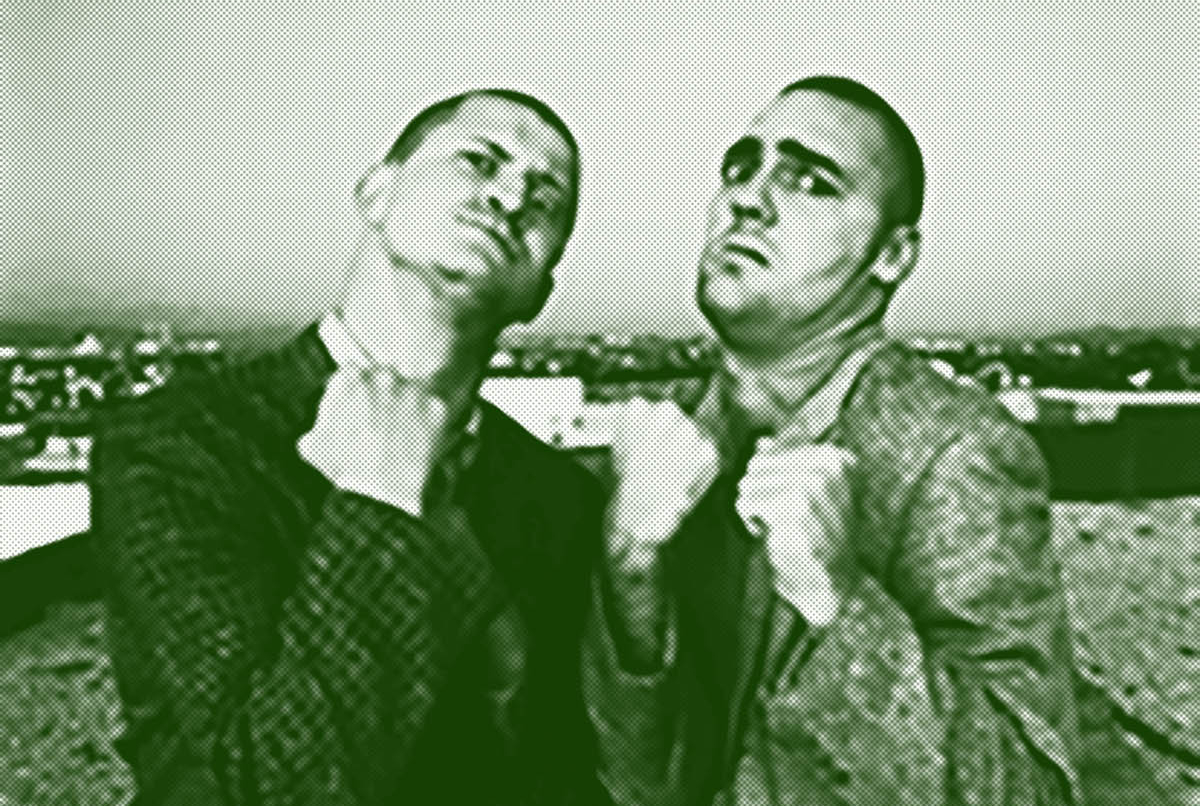 Florian Reichert began the discussion with a strong statement: wanting to conserve “is already very strange in relation to physical performance.”

Reichert began as a violoncello student at the conservatory in Graz. When he grew dissatisfied with the same repetitions of the same concertos every student had to rehearse, he decided to go into another direction and joined the theatre school Dimitri (today Accademia Teatro Dimitri) in Verscio.

With regard to conservation, Reichert posed the following questions:

What is a moment?

What does it mean to conserve something?

What does it mean to reproduce something?

What does it mean to re-enact something?

Reichert recounts that while students at his Department produce their own theater texts, none of them ever thinks of putting on another student’s work. But they reinterpret canonical texts as a matter of course. Reichert says:

The question is, how is the work of art related to the author ? … For Mozart it was already clear that, when he writes a composition, it will be reproduced and the more it is reproduced the better for him. In contrast, when I see the works that the students do [at Bern University of the Arts], … no one would get the idea to reproduce the project of their colleague, because it’s his project. Then in another room, a quarter of an hour later, in another lesson, the students have to interpret classical texts and they have this door to door. That is a very interesting contrast. I did the same but at different schools, at the conservatory we only interpreted the concertos of others, and the school Dimitri [Accademia Teatro Dimitri, Verscio, CH] was fully focused on authorship. [At our Department] in Bern it’s a mixture of both. … My projects are linked to my personality, kind of humour and a way of thinking, and I would not like to have them reproduced by others. Maybe I would like to have them conserved [sic!], but never reproduced.

For Reichert, the comedia dell’arte is a good example of both—conservation and reproduction:

I got to know a comedia dell’arte actor. He’s now probably 80 years old, and he has been doing [the comedia] all his life. He was already born into a family whose members worked in this genre. It was part of their tradition. … He felt free to improvise, because he knew how every character could behave, how the characters could relate to each other. … You could confront him with any problem or situation, and he would know how the doctor, harlequin and pantalone would behave and how they would relate to each other. This is ephemeral but based on a wide knowledge. He would never get the idea to construct a theatre piece that works like this, that is written strictly, like a [Luigi] Pirandello piece [an Italian dramatist, novelist and poet].

The Kipper Kids (Martin Rochus Sebastian von Haselberg and Brian Routh) practiced a form of performance somewhere between theater and art, and even dabbled in LA’s punk scene.

When a play is performed several hundred times, the performance becomes a clockwork that runs smoothly. Reichert mentions how his theatre group came up with rules to keep the other actors on their toes:

We also had to earn money, therefore we produced plays. We played one particular play over 450 times. … We were a group of five people. We always had different levels of it being new— with a different public, ambience or theatre. There were rhythms of routine. You perform, and you think: “when the show is over, I have to buy oranges, I have to do this, I have to do that.” And all is like a small clockwork, it’s working, it’s running. And then you get bored and it gets very exhausting to do it. You add some provocations. For example, you agree, that everyone is obliged to do once during the show, which was 1.5 hours, something completely different and you never know when it’s going to happen. So, for 1.5 hours you are quite aware of, first, when do I trap the others or when will the others trap me. And these are small games that you play and it’s very interesting, because you have five actors, and you know there will be five actions that will be different, which keeps your mind fresh and constantly aware of the surroundings.

So how the conservation of non-reproducible pieces could be imagined? Rejecting reproduction in favour of conservation,  Reichert reminds us that each work is the result of a certain time and a certain context:

Every work has a core. You can have a written script, some photographs and possibly a film, but these are not the proper work, they can only give you a clue of what the play is about and document how it was perceived. It’s a bit like the performance-book by Elisabeth Jappe [Elisabeth Jappe, Performance – Ritual – Prozess: Handbuch der Aktionskunst in Europa, 1993] showing different examples of performances. There you can see that these performances are results of a certain period and place, e.g. having taken place in Germany. They wouldn’t have worked in Switzerland, or they wouldn’t have worked in Italy, they would have only worked in Germany, in a post-war situation. All these contexts would be something interesting if you document it.

For the conservators the main questions are therefore: What are the most important aspects that need to be saved? And how can you conserve this for people who were not there to experience the work live? It seems important to keep in mind that the conservation of a performance is already a form of interpretation.

With regard to the question of reproduction, Reichert mentions two examples in which the reproduction was unsuccessful:

In the eighties, there was an attempt to revive the ‘Triadische Ballet’ (triadic ballet, first performed in 1922) by Oskar Schlemmer at the Stuttgart Staatstheater. It was a big moment. Amongst very sophisticated costumes that were used, there was one futuristic iron skirt that became detached during the performance and it was balancing in an unexpected way. I remember this very vividly, and I am sure that for everyone one half of the memory is this material that got lost. This  might be seen as a comment on the imperfection of the reproduction. I am sure that everyone who was in this show will remember this one skirt. Also, there is a small village close to my place in the Ticino, which is called Terra Vecchia. And there is someone who is very engaged with a foundation to rebuild this village. It was kind of a social project to have addicts work. And now this village is nearly finished, and people ask themselves, what could it be used for? Different uses have been probed, currently there is a project that involves migrants. Although everything is perfectly done, there is something strange in the atmosphere that makes me feel a bit uneasy. In the village, I met a young men from Afghanistan, who said: ‘This village is like my  computer game.’ I realised that in the design of those computer games, they re-enact a medieval atmosphere, but the time in those games does not pass. If I look at the village I live in, there are old houses and people who make new constructions; there are things broken or decaying and someone rebuilds something. Therefore, the passing of time is always present. And in this reconstructed –‘re-enacted’ – village time is not present. One encounters the twenty years of reconstruction but the 500 years of decay and continuing rebuild—all the things that make up life – have vanished.”

For a long time, conservation was focused on the material aspect of a work. The aim to pass the work on to future generations has not changed, but conservation now takes its own subjectivity more into account. Also, conservation will not mean the same thing for everybody. We have to ask yourself: For whom do you preserve?

Reichert enjoys it when the documentation about a performance creates some distance to the actual piece of work. Therefore, he prefers books to films, as in his thinking a book does not want to mirror what was performed. In the book, text and photographs provide the reader with the liberty to interpret the performance however he or she chooses. There is more distance between the reader and the text, than between the viewer and a video recording of the performance. The viewer becomes a consumer, who consumes the performance.

When a performance is first enacted, there is often an urgency in the performer to act. However, when something is reproduced, this original urgency is absent. While a play by Shakespeare was originally created with the idea for it to be reproduced, and thus, the reproduction is contained within the artwork, many performance works, such as those of Marina Abramovic, were not meant to be redone fifty years later. The performance was born and done in a specific historical moment, with all its political and societal intricacies. What seems to make  Reichert feel uneasy is that now, when performance is restaged and people can buy tickets to go and look at it, it is simply not the same.

In the context of performance conservation, the audience plays a central role that differs significantly from that of theatre or a classical concert. Reichert recalls his former practice as a classical musician:

I remember my period as a classical musician playing in a symphony orchestra, when me and my colleagues were quite clear about when we were really ‘on the flow’ and we were part of it, of the ‘symphony’, but we didn’t ‘interact’ with the public. What was important was the interaction with colleagues, a feeling which was like a wave. And otherwise there were ninety elements of a symphony orchestra and everyone played his own part, there was nothing merged. In theatre you are much more dependent on the support of the public. There is a kind of modulation.  In the prose-theatre, you have the text, you follow on. Surely, it is nice when the wave is going on from the one end to the other, but you can go independently of the audience to the end. The other extreme would be ‘theatre sports,’ when the public is bored, they throw shoes on you – which is – of course – part of the game and in itself still framed. The same is true for the golden concert hall “Musikvereinssaal” in Vienna: All rules are settled and framed.

Is the question of the public a central aspect in a performance conservation? Should we first and foremost ask: Who is/was the public? How did it come together and under which circumstances?

Documentation, archiving and conservation of performance art are interesting for many reasons. If we look closer at documents, photographs, videos and witness-reports, we might ask, what else can be seen and read from them apart from the obvious presence of actors? This is another reason why Elisabeth Jappe’s book is so revealing: one sees not only the action, but also the situation – the “situ-action”, the place, the environment – and the audience. To document performance is difficult nowadays, because, in order to avoid the violation of personal rights, the audience has to be asked for permission to be photographed before every institutionally-organised performance.

Since performance art does not usually know a central perspective (like the proscenium in the classical theatre), it is often a matter of multiple perspectives, and also of simultaneous, differing events, which often lack narration and standardised repertoire. Neither in their physical material nor in the action are performances symbolic or symbolising acts.  No muscle can be trained, no sequences can be rehearsed. Paradoxically, however, performance art is seldom improvisation. The longer we spin our thought-figures in this conversation, the more excited, but also the more confused we are.