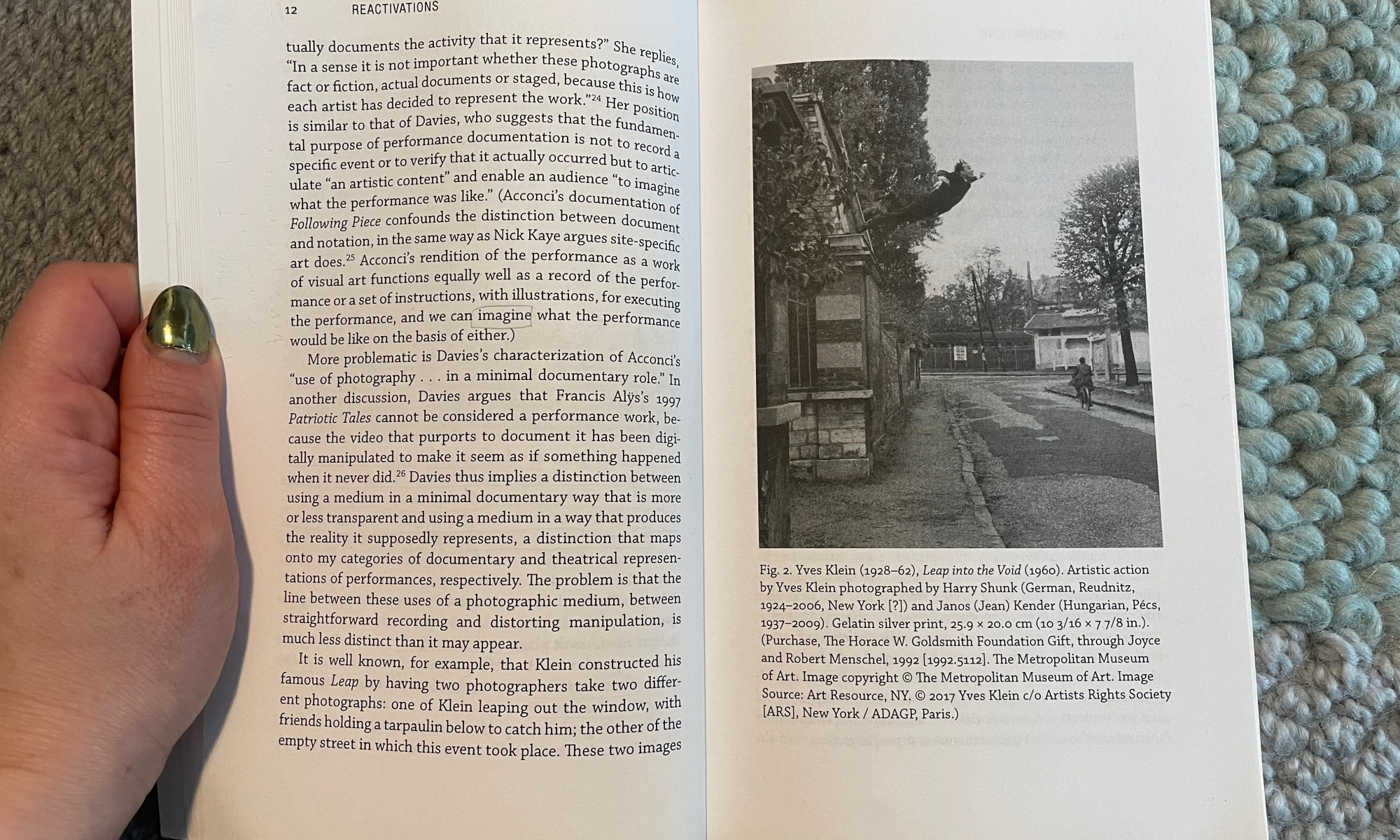 Recently, our team met with Philip Auslander, an influential performance scholar who has argued that performance documentation is not merely a passive afterimage of a live act, but rather can be seen to partially – in some cases, even wholly – determine a performance’s reception and thus actively shapes what we understand the performance to be. Such documentation, Auslander argues, is itself “performative.”[1]

Certain performance works, as he has pointed out, exist only as documentation – for example, Yves Klein’s famous Leap into the Void (1960), in which the influential artist and prankster appears poised to either fly into the air like a bird or smash himself against the hard sidewalk. In reality, the photograph was edited to remove the group of friends waiting to catch him safely. Thus, the “performance” exists only as doctored documentation – which is, of course, part of Klein’s point, and part of the work’s fascination. For Auslander, Klein’s altered photograph should be considered a form of “theatrical” documentation, meaning that it supplies viewers “with the experience of a performance that never took place in the way the photograph or record presents it.”[2]

Yet while Leap into the Void winks at the possibility of documentary deception, photographic evidence can be just as constitutive of performances that rely on the viewer’s trust in their reality. During our discussion, Auslander brings up the example of Chris Burden, a performance pioneer who carefully staged the documentation of his work and thoughtfully chose the images he wished to represent it. One example is Burden’s 1971 performance Shoot, in which the artist arranged for a friend to shoot him with a .22 caliber rifle at the F-space Gallery in Santa Ana, California. Auslander’s point here is that, while Shoot is widely considered a landmark of performance art, vanishingly few people actually witnessed it: Besides the videographer, photographer, and the two performers themselves, only a handful of people were in the gallery when the performance took place. For better or for worse, Auslander points out, the documentation “is” the performance.

Still, it is crucial to this work’s power – and Shoot brought the relatively unknown young Burden widespread attention – that the documentation be seen as an authentic representation of what took place, rather than a media fabrication intended to deceive. Though he did not admit to it explicitly, Klein cheekily dared his audience to discover his subterfuge, writing in an accompanying text that “Today the painter of space must, in fact, go into space to paint, but he must go there without trickery or deception, and not in an airplane, nor by parachute or in a rocket: he must go there on his own strength, using an autonomous individual force; in short, he must be capable of levitation.”[3] Burden, however, needs his viewers to believe that he was truly shot; the work is intended not as a provocative boast, but as an extreme experience. Shoot makes clear, then, that documentation plays a role in the creation of a performance even when that documentation is intended to be seen as a perfectly transparent reflection of what transpired. In short, while conservators and scholars may distrust or at least criticize documentation as a record of performance, we do well to remember that a performance and its documents cannot always be clearly separated from each other.

Burden released a video recording of Shoot, but the action is so quick – neither human eyes nor the camera he used can follow a bullet – that photographs and stills might tell us more than the moving image. In our conversation, Auslander also expressed skepticism at the commonplace assumption that time-based media provide better documentation of live performance than still photographs.[4] A photograph might seem limited in its temporal scope – why choose a single still image when it’s possible to combine a series of them into a moving, changing picture? ­– but in fact, Auslander argues, “a still photograph does not show you just that moment, it also implies what came before it and implies what comes after it.”

Is documentation therefore a form of conservation? For Auslander, the answer is no. “I think that I tend to think of these things as verbs rather than nouns – to document, to conserve,” he explains. Documentation, he notes, is often a process of simply capturing data – as much data as possible – which then must be analyzed, evaluated, and used for further study. For him, documentation is therefore a kind of precondition for conservation. This may be the case even when the “documentation” is created after the fact, as in Babette Mangolte’s 1993 film reconstruction – or in Auslander’s term, reactivation – of four performance works by Robert Morris that had originally been performed thirty years earlier, and for which visual documentation is – or rather, had been – sparse. For Four Pieces by Morris, Morris filled this gap with verbal description of his works, which were then performed by a new generation of artists. Auslander believes that watching this retroactive documentation – put together by an artist, not a conservator – might well be the best way for contemporary viewers to get a sense of what Morris’s performances were like.

Our conversation with Auslander was an important reminder that the related activities of conserving, remembering, and understanding performance are not at all identical to recording performance – and that, therefore, more data does not necessarily always lead to better conservation. A single, striking photograph – what Auslander calls “that one iconic image” – taken by an influential documentarian like Peter Moore, Babette Mangolte, or Rudy Burkhardt might flatten a work’s complexity, but it also provides a powerful visual emblem of what took place.[5]

[4] As Auslander puts it elsewhere, “still images are not just still.” Reactivations, 7-9.

[5] Moore (1932-1993), a photographer, and Mangolte (born 1941), photographer and filmmaker, were prolific and influential documenters of the New York scene in the 1960s and ‘70s. Auslander discusses their work in “Surrogate Performances: Performance Documentation and the New York Avant-garde, ca. 1964–74,” Reactivations, pp. 69-96. Burckhardt (1914-1999), a Swiss-born photographer, documented an earlier generation of New York artists, primarily in the 1950s and ‘60s.